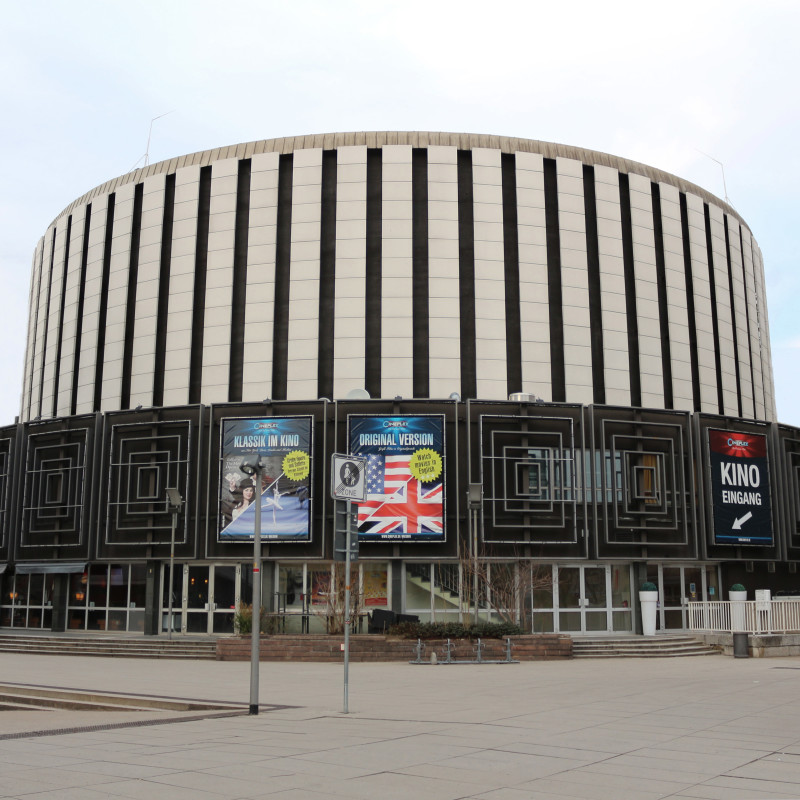 The cylindrical building of the Rundkino (Round Cinema Theater) is one of the most striking buildings in the city center of Dresden. The rotunda has a diameter of 50 meters, a height of 9 meters and a width of 20 meters. Due to its architecture and the Great Hall with 898 seats, the Rundkino is one of the most important buildings of postwar modernism in Dresden. Its Great Hall has the largest cinema screen in Saxony.

At the time of its opening in 1972 it was the first cylindrical building in the German Democratic Republic (GDR) designed for the public. The cinema theater was intended to host the film premieres in the District of Dresden. It was supposed not only to screen movies but to offer a house for film art and different kinds of events.

At the time of its construction cinema going still was a social event and the technological innovations of the time tried to keep up these expectations. Besides that, the cinema was supposed to demonstrate self-confidence and international standing.

Besides the Great hall, today the building hosts another five screens and a puppet theater, belonging to the Theater Junge Generation.

To design the theater appropriately, a competition was announced in 1966. Its purpose was to achieve a contrast to the cuboid buildings in the area. The building was also part of a larger project to rebuild the city center of Dresden which was completely destroyed in 1945. It aimed to give the city an attractive, culturally acclaimed face and revive it. The winning design was drafted by Manfred Fasold and Winfried Sziegoleit. It was realized by Gerhard Landgraf, Waltraud Heischkel and Theo Wagenführ (interior design).

The building resembles the design of an UFO and relates to the utopian notions of the late 60s. On the outside, the ground floor is shaped with glass, framed by polished black stone. Following that, there is a line of protruding segments configured with rod plant ornaments made of steel by Dresden graphic artist Gerhard Papstein. This construction was to evoke a levitation effect, especially when the lights on the inside of the first floor is turned on in the evening.

The cylinder was constructed from in-situ concrete sliding type following concepts that were used for industrial buildings. The complicated and spectacular roof structure was realized by the Berlin Academy of Architecture (Bauakademie Berlin). Its design aimed to fit the round shape by avoiding any references to the dome of a sacral building. It is a cable net suspended structure with pressure and pull ring from 96 radially tensioned steel cables. Prefabricated elements were hooked into them that have been grouted with site-mixed concrete. The roof construction is accessible.

The interiors were designed by Theo Wagenführ.

Before the renovation in the beginning of the 1990s there was an ample cloakroom, the counter area and a small theater on the ground floor. The walls are covered with bright Bulgarian sandstone, a reference to the regional landscape.

A wide, free-swinging, straight staircase leads to the upper floor, where the Great Hall is situated. It has a trapezoid ground plan and a theatrical, almost expressionistic atmosphere. The spectacular ceiling of the Great Hall is lined with wooden elements, in which 638 lamps are incorporated. Originally the interior was equipped with steel pipes and red upholstery. The screen is shaped concave and has a scope of 9.2 meters high and 21 meters wide.

Four winded, narrow stairs lead to the back of the wardrobe and separate exits. Their function was crucial in earlier times, when people could get to their cloaks without too much jostle. Located on the upper floor is a representative foyer, which was formerly equipped with black leather armchairs.

The main cinema screen was equipped with 70-mm wide-format projection, which back then allowed the screening of these formats especially of Soviet film productions. Besides film screenings, the Great Hall was used for concerts, events, music festivals such as the Dixieland Festival as well as so called Jugendweihen. In the 1980s the cinema, among few in the GDR, was equipped with a Dolby-stereo system.

After the German reunification

In 1990 the UFA took over the cinema and started programming again in 1991. During renovation work, five more small screens were set up in the basement. Besides, the newly built Ufa Crystal Palace opened Next door in 1998 and offered another eight cinemas. In return, the city of Dresden made the Studiobühne available to the puppet theater free of charges.

Since 1995, the new buildings of Wöhrl Plaza complex enclosed the Rundkino to some extend and obscured the view on the building from Prager Straße. It fell into an encapsulated situation. Nevertheless, it was one of the most frequently attended cinemas in Germany until 1997 as it was the only movie theater in Dresden to show Hollywood blockbuster. Shortly after an extensive renovation and modernization of the Rundkino began.

Bankruptcies and a new beginning

Between 1997 and 2000 three new multiplex cinemas opened in Dresden and the number of visitors of the Rundkino declined. During the flood in 2002 the lower floors were severely damaged and the basement screens could no longer be used.

In 2002 the operating UFA company went bankrupt. In 2003 the Kinogruppe Kieft & Kieft (Cinestar) took over the operation of the Crystal Palace. Due to a contractual clause, no movies were programmed anymore in the Rundkino to avoid competition.

Since then, the initiative rundkino_revisited, turning into the non-profit organization Rundkino Dresden e.V. in 2005, campaigns for the preservation of the building and its prospective use. In 2003 it has been declared a historical monument.

In 2004, the owner company of the Rundkino, UFA Theater AG, also declared bankruptcy. The same year the contracts for the operation of the Crystal Palace were dissolved and the ban on the Rundkino was annulled.

In 2007 the building was purchased by Tetris Grundbesitz. Screening in the Great Hall was revived under the name of Cinemagnum using 3D technology, operated by Fantasia Film. Four of the damaged ground basement screens were renovated and opened again for operation.

Since 2011 the *Rundkino *belongs to Cineplex, one of the largest cinema chains in Germany.