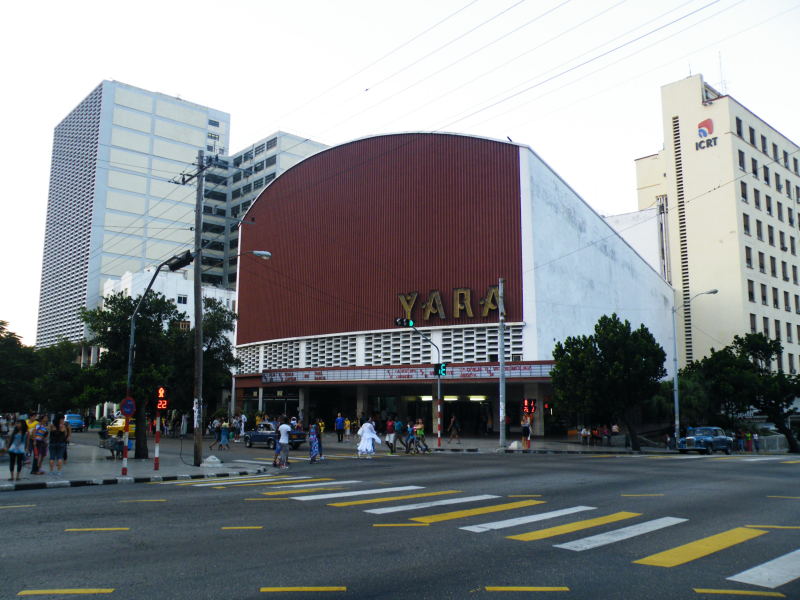 View from across the street

The Yara is a true cultural icon, built by the architects Emilio del Junco, Miguel Gastón and Martín Domínguez at a very busy corner of Vedado, right next to Avenida 23. It occupies the frontal section of the Radiocentro architectural complex that was inaugurated in 1947 and is still considered to be one of the cornerstones of Cuban modernist architecture. It had the most advanced technology of its day in terms of acoustics, lighting and air conditioning. Originally it was called the Warner, then the Radiocentro and from 1960 it has been the Yara. In its early years, according to the reigning custom of the times, the theatre not only showed films but scheduled variety shows in its 1650-seat hall, including performances by famous Cuban and Latin American artists such as Libertad Lamarque of Argentina and Pedro Vargas of Mexico. These days, many popular Cuban musical groups have performed there and there have even been screenings of the finals of world soccer championships. Every December it is one of the important venues for the International Festival of the new Latin American Cinema. Probably due to the fact it is across the street from the famous Coppelia Ice Cream Palace, it is a central point in the social lives of many Cubans.